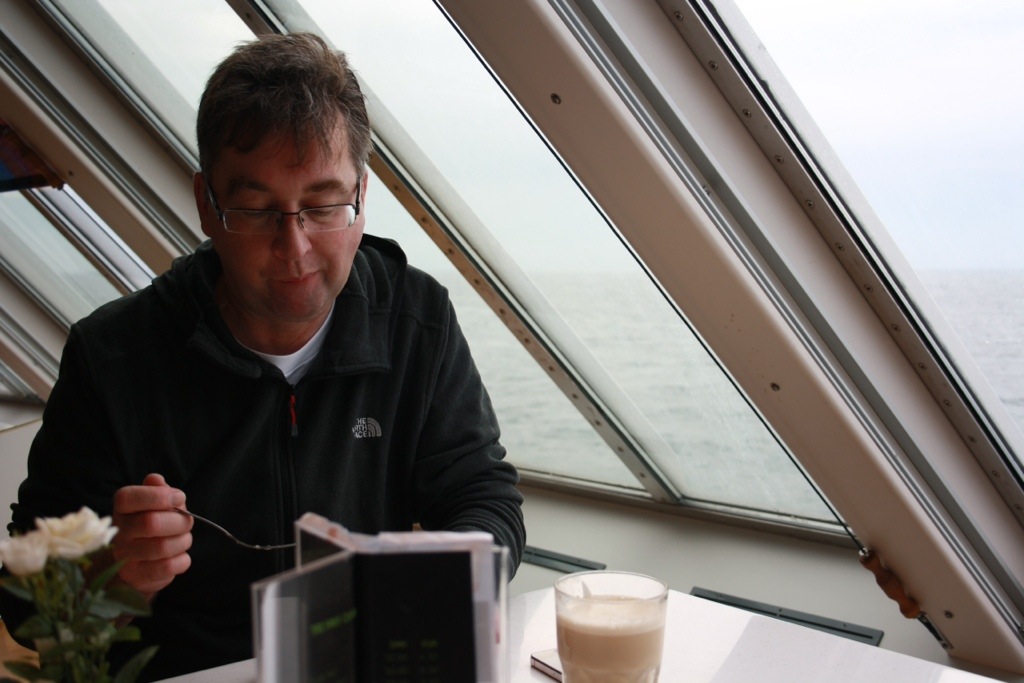 Graeme on the ferry

Our journey has essentially three main stages – revisiting places in Belgium and the Netherlands where we had spent time with Jane, revisiting Uppsala in Sweden, and then reaching our final goal of Russia where Jane had always wanted to go. The stages in between are steps in the journey, stop offs on the way, but a chance nonetheless to take in sights which I am sure Jane would have enjoyed seeing.

It didn’t matter where we were travelling to – it was a chance to see new places.

And we’ve been seeing our fair share of new places over the past couple of days as we have made our way from the Netherlands to Sweden.

Train on the ferry

We left Hamburg by train on Tuesday morning, and about five hours later arrived in Copenhagen. There’s not really very much you can say about a train journey. This one was a bit different though. We had a lot of water to cross. This as you would expect was mainly by bridge, but there was one stretch of water between Germany and the Danish island of Lolland, where the train was loaded on to a ferry, and we were able to stand on the deck for the forty five minutes of the crossing.

One constant as you travel through Northern Germany and into Denmark are the wind turbines. They are everywhere – they stand together in clumps, in fields and off shore, and on the edges of villages and towns. They are so commonplace that they must just be the accepted norm. They are quite haunting in a certain way as we speed by.

And so to Copenhagen.

We didn’t have long enough to see as much of the city as we would have liked, too short to be able to really judge whether it really is “Wonderful, Wonderful Copenhagen” as Danny Kaye would have had us believe.

It certainly has some very imposing civic buildings, such as the Radhus (the Town Hall) and the Folketing (the Parliament), so familiar to anyone who watched the popular Danish TV series, “The Killing” and “Borgen”.

I hesitate to mention “The Killing”.

I had been absorbed by the first series – the investigation of the murder of a young woman by an unconventional police detective Sarah Lund, and her bumbling colleague Jan Meyer. There were plots within plots, twists and turns, blind alleys which the police went up following leads which initially seemed convincing, but subsequently turned out to be false. You were taken on a journey which had the feeling of how a murder investigation would be conducted.

But it had something different – its focus on the family of the victim Nanna Birk Larsen.

The intensity of emotions in the aftermath of the murder, the utter despair of the parents, the pain of telling two little brothers that their sister was dead, family members trying to cope in different ways and pulling apart, and how the police dealt with the family, often in a fairly hapless manner. Events bigger than anyone could reasonably be expected to cope with.

Now the circumstances which we encountered were of course very different, and we as a family were faced with the brutal reality of Jane’s murder, not some fictional account. But we went through all these emotions, and we encountered many similar reactions to those portrayed in the series.

The difference is that we are still living with these emotions on a daily basis.

A TV series comes to an end.

The last time I saw Jane alive, one Saturday evening ten days before she died, I said to her that I had been watching this fantastic Danish TV series called “The Killing”, and now that it had finished what would I do with myself on a Saturday evening?

We found a Scottish pub in the centre of Copenhagen, hoping that we might catch the football match, Scotland v. Macedonia. They were however screening a match involving England, so we went elsewhere.